The different types of collisions are more of an interest to the scientific community; in particular, nuclear physicists. The collisions spoken of here, most often refer to those that happen on a microscopic level. These have to do with molecules, atoms, and sub-atomic particles. The kinetic energy contained in particles is converted into vibrations where energy builds up and heat is given. This causes a deformation in the particles’ physical structure. The build-up of heat signifies the conversion of energy from kinetic to heat; thereby a loss of kinetic energy 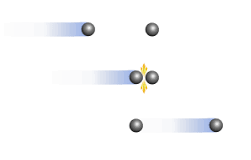 This type of collision occurs only when there is no loss in kinetic energy for both particles involved in the collision. The collision is such that no energy was converted into sound or heat; thus allowing both particles to retain their previous energies. This is exactly the effect of a super elastic collision. Again, the why’s and how’s are unknown, but it was observed to happen. This collision was seen during a coronal mass ejection. Two magnetized plasmoids collided and caused a kinetic energy increase of 6.6%.

Why is this not observed more often here? Liquid and gas particles often just combine in perfectly inelastic collisions. As a result, solid particles are observed the most by science.

Magnetized plasmoid is a totally different matter altogether. Plasma is another form of matter, like solids, liquids, and gas.

According to science, plasma is the most abundant material in the universe. It makes up a very huge part of our sun. We all know that the sun creates and ejects enormous quantities of energies, all the time.

Magnetized plasmoids can increase energy through collisions. Maybe this is part of the sun’s energy generating mechanism? There are no answers really. Right now, all science can do is peer at the surface of the sun and speculate.

So how do we tie all these different types of collisions together? A good example is baseball. At that moment when the bat collides with the ball, different things occur. The ball doesn’t stay round. The shape is deformed. At this point, kinetic energy is converted into potential energy.

If all energy converted to sound or heat, with total loss of kinetic energy, that would be a perfectly inelastic collision. This leaves out super elastic collisions. Among the different types of collisions, this one still has to be explained.